At this point in the conversation history relevant to Roger Maris, there’s probably not a whole lot to add. Suffice to say that likewise little elaboration is needed to explain the understated significance of numerical cataloging for the Roger Maris base card issued by Topps following his watershed season of 1961. Or perhaps that decision was neither understatement nor thinly veiled bias–but rather a relative, resounding declaration by those at the helm of cardboard culture. Indeed the entire 1962 Topps set with its unpretentious yet salient background & borders styled in imitation wood grain like sliced cross sections of an ash wood bat seems to be the pronouncement of an era (or at least a season) orientated towards hitter, slugger, launcher of orbs. No, there’s little else to add but nostalgic hyperbole such as this. . . . Then again, a couple of pertinent artifacts might still amuse. 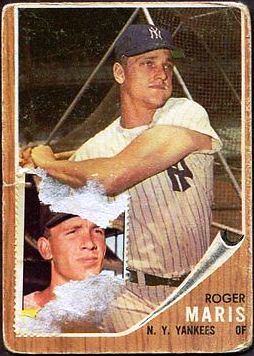 Given a choice, of course I’d take the weather-wracked, defaced Roger Maris card, sans flashy slab and authentication. It simply feels more real to me.